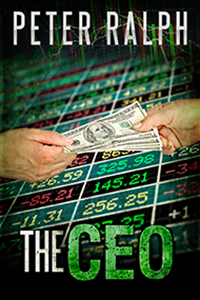 Douglas Aspine was a cold, calculating despot who lusted for the riches and power that came with being a public company CEO.

He was forty-five and running out of time when fate dealt him an unexpected opportunity.

The company was old, staid and well-respected, but it was underperforming, and Aspine was determined to turn it around no matter who he had to crush or how many toes he had to stand on.

Soon he was at war with the company’s employees, unions, suppliers, financiers, and co-directors, but nothing was going to stop him. Not his chairman, not his wife, not his mistress, not the anonymous death threats, and definitely not the media.

He could almost taste the glory, the riches, and peer recognition he’d craved for so long, but would those who he’d hurt so badly let him enjoy his ill-gotten gains? He knew he had countless detractors and enemies who he contemptuously labelled “losers” and paid them no heed.

Would this prove to be a miscalculation of monumental proportions?

The CEO is a financial thriller that will grab you from the first line and take you on an enthralling, surprising and suspenseful ride you will not forget.

Get your copy of The CEO now!

The CEO is up there with the great financial thriller masterpieces …

The writer’s adage “write what you know” has never been more appropriately utilised as by Peter Ralph in his corporate crime novel The CEO. Ralph has used his experience as a former CEO of a publicly floated Australian company to craft a superbly structured book of ruthless business bastardry …

Douglas Aspine is so loathsome a creature, it can only be Schadenfreude that makes us read on in the fervent hope he gets his just desserts. The man who would be CEO is a spendthrift with a wife and a mistress and a truly regrettable tendency to judge people’s worth on the degree to which they best serve him. It is hardly surprising that, when the opportunity presents itself, Aspine grabs it with both talons, as it is wholly in his nature that he bully and cheat and gloat over his corporate victims. Peter Ralph, in this nicely constructed thriller, arranges for our Mr Aspine to meet his nemesis. As a former chartered accountant specialising in corporate recoveries, Ralph knows his stuff.

The CEO is a pacy business thriller reminiscent… of some of John Grisham’s books. It is the story of how this aggressive, greedy and ambitious man lies, cheats and manipulates his way to the CEO position of an underperforming public company, and what he does once he gets there. It’s a tale of mass sackings, intimidation, insider trading, infidelity and unscrupulous behaviour – and that’s just the start. Populated by thinly veiled versions of Australia’s most notorious white collar criminals, it’s a page-turner about the dark side of the corporate world, and it makes compulsive reading.