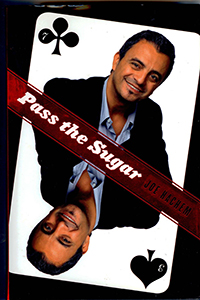 Pass The Sugar’ (Joe’s catch phrase after he wins a big pot) takes readers on a journey that many dream of … from playing home games of Poker with friends to becoming a multimillionaire world Poker champ. Joe’s story proves that dreams can come true.

The book gives insights into how Joe plays the cards he is dealt, in life as well as on the poker table. Faced with adversity which could have ruined his life, Joe turned to the pastime that he loved, and outlayed $10,000 to compete against 5,618 combatants including many of the world’s top professionals in the World Championship of the game known as the ‘Cadillac of Poker’—No Limit Texas Hold ‘em.

The prize is the richest in sport…more than Wimbledon, the US Masters or the Tour De France.Come with Joe from his childhood journey from Lebanon to Australia to the final table at the World Series of Poker Championship at the famous Binion’s Horseshoe Casino in Las Vegas where he made poker history with a 7 of clubs and 3 of spades.

Along the way you will learn about perseverance, the importance of family and the workings of a great poker mind.After his famous victory, Joe still felt the need to prove himself—for validation—and seventeen months after winning the world championship he achieved poker immortality by winning the second richest tournament in the world, The Five Diamonds at the Bellagio, becoming one of only four players in the history of poker to achieve this amazing double feat.

The book also relates stories of Joe’s encounters with some of Hollywood’s biggest stars, tournaments that he’s played around the world and the work that he does to promote Poker internationally and charitable causes at home. It is the story of a man who has scaled dizzy heights but whose feet remain firmly on the ground.