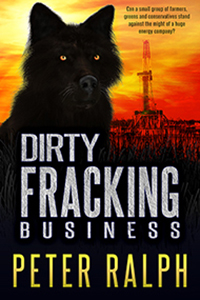 The air and water in the Fisher Valley were pristine before a large energy corporation conned farmers and landowners into letting it have access to their land.

Once on the land, it drilled and fracked coal seams deep below the surface, without a care for the air, ground and water it was polluting.

When little Charlie Paxton, aged only six, dies from a mysterious form of cancer, his father, Charles, swears to have his revenge. Determined to stop the energy corporation, Charles, sets off with his faithful dog in the middle of the night to set its wells on fire.

An unholy alliance of farmers, greens and conservatives quickly join the cause, but rapacious governments won’t hesitate to use the police and army to protect the energy corporation’s ill-gotten ventures.

Will the environment be saved or will big business get its way?

I moved to the country for peace and quiet and little did I know that I would become embroiled in the battle of my life. Peter Ralph brings to light the everyday struggle of people who find their lives suddenly caught up with one of the most insidious industries in the world – Coal Seam Gas.

Dayne Pratzky aka The Frackman

Peter Ralph has sensitively and dramatically portrayed the heavy price that will be paid by rural Australia if this industry goes ahead as planned. His story brings home to us the need for all Australians to see themselves as custodians of this beautiful land.