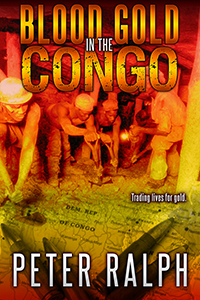 “This is an outstanding read and simply a wonderful action/adventure story.” – Reader’s Favorite

When twelve-year-old Congolese boy, Joseph Muamba, is sold to a wealthy American family he wants to die.

Eventually, he comes to love the family and lives the life of the all-American boy. However, he cannot rid himself of a nagging feeling that he has a greater calling in life.

Fourteen years later he competes at the Beijing Olympics for the Democratic Republic of the Congo and wins his birth country’s first-ever medal – gold in the decathlon. However, the nagging feeling persists, not satisfied with Olympic gold.

Revered, he returns to the Congo as a guest of the president but is horrified when he discovers Westerners and the Chinese are bribing politicians and plundering the country’s mineral wealth.

Bribery, corruption, rape, and murder are the norm in the Congo. When the poor, oppressed people protest, they are imprisoned or killed.

Finally, Joseph realizes what his calling is, but it involves risking his life, and the lives of those whom he loves.

Endless twists and turns will have you chewing your fingernails. Get your copy of Blood Gold in the Congo now!

Author Peter Ralph was inspired by true events in the Congo to pen his novel, Blood Gold in the Congo, and his rendition of this tale is truly wonderful. From the very first pages, the reader is drawn in and rooting for this little boy, uprooted from his family and everything he knows, to be transplanted into an alien setting, albeit a very gilded one, in the United States. The story is an action/adventure worthy of “Boys Own” magazine and yet also has great undercurrents of social comment and extremely relevant issues of corruption of power that are well worth discussing and rereading. I enjoyed this book immensely and found the author’s style easy and captivating. The secondary characters are developed and imbued with realism equally as well as Joseph Muamba was, especially his two boyhood friends, Maya and Yannick. Probably the saddest thing about this story is that it could have been written and equally applicable to almost all of the colonized African nations of the late twentieth century. The powers that ruled Africa for over a century inevitably left behind a legacy of corruption, violence and a power vacuum that would spur racial, ethnic and clan wars for decades after their departure. The recent revelations by CNN of child labour exploitation in cobalt mining in the Congo merely confirms the premise Ralph used for the basis of this novel.
This is an outstanding read and simply a wonderful action/adventure story.